Our condolences: It is with great sadness that the death of Her Majesty The Queen has been announced. All at LNER send our condolences to the Royal Family.

Enjoy your own big city bonus.

Taking you into the nation's capital at 125mph.

No need to break the bank to get to London – we offer the cheapest fares on LNER trains to London when you book on our website and you'll never pay a booking fee when you book here.

LNER trains arrive and depart at London’s Kings Cross Station, located to the north of the bustling West End. You can also make your trip to London even easier by booking your train and tube tickets in one easy transaction right here on our website.

LNER trains run every twenty minutes from Leeds or York to London. Trains to Newcastle, York and Edinburgh run twice an hour, and there are hundreds of other connections along the East Coast mainline linking London to the rest of the UK. There is a great range of cheap train tickets available on our website from destinations all across the country.

Book and travel with confidence

Book and travel with confidence.

Lose yourself in London for less

The capital needs no introduction. World famous landmarks, huge green city centre parks – this is the epicentre of where it all happens. You’ll feel its intoxicating cosmopolitan buzz as soon as you set foot on the platform. And with a cheap train ticket, it doesn’t take much capital to get there.

Plus, when you join LNER Perks you'll get £5 free and 2% credit back every time you travel with us.

Things to do in London

London’s calling - a melting pot of food, fashion, culture, history and shopping recognised as among the best in the world.

Places to eat in London

London is one of the world’s great cities for food lovers. Its streets are packed with a dizzying array of foodie delights. Here’s our guide to a foodie day in London. 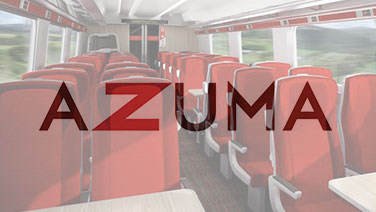 Our new Azuma trains have arrived

Our new Azuma trains are here, click for a first look inside the new Standard and First Class coaches and find out what makes our Azuma trains a more comfortable journey.

From traditional boozers and trendy cocktail bars, to loads of live music and the world on a plate. London has a rep as a city that never sleeps for a reason…

Stranger Things locations in the UK

Immerse yourself in the Upside Down and experience a little bit of Hawkins right here in the UK. Here are two Stranger Things attractions.

Plan your journey to and from a station

See upcoming events that you could go to

Dylan Moran: We Got This

Curmudgeonly Irish stand-up who wrote and starred in the TV sitcom Black Books.

The all-new, 11th solo show by Scotland’s international comedy star, hot on the heels of his ground-breaking, global smash-hit ‘Daniel Sloss: X’. The incredible ‘X’ tour sold out across 40 countries, with 300 shows including over 30 European countries, UK, U.S., Canada, Australia, Hong Kong, Japan and even packing a Moscow arena (becoming Russia’s biggest-ever English language comedy show). The film of ‘X’ is showing on HBO in U.S. and Canada and became the first UK comedy special to make its UK premiere in cinemas, with its nationwide release at Vue. Daniel’s previous two Netflix specials ‘Dark’ & ‘Jigsaw’ are streaming in 190 countries, 26 languages with the infamous ‘Jigsaw’ now credited with breaking up over 75,000 couples and cited in over 130 divorces world-wide (with fans even bringing their divorce papers for him to autograph at shows). He has sold out six New York solo off-Broadway seasons, appeared on U.S TV’s ‘Conan’ ten times, broken box office records in Edinburgh and toured in over 50 countries – this is his new show and it’s a strictly limited tour – Book Early! With special guest Kai Humphries * ‘Dirty, sweet and clever’ (New York Times) ‘Smouldering… deliciously dark stand-up. Brilliant!’ (Mail On Sunday) ‘Dazzling wit… Unstoppable’ (Daily Telegraph) ‘Simply world class… hilarious’ (Herald Sun) ‘Comedy provocateur’ (TheMusic.com.au) ‘Hilarious… Sloss is a festival highlight. See him!’ (The Age) ‘Sloss is at the top of his game… exciting and powerful… Challenging and controversial… a master craftsman and a truly edgy stand-up star with his finger very much on the pulse… Brilliant!’ (Time Out)

Possibly the greatest songwriter of all time The impact of Bob Dylan cannot be overstated. Nobody else so revolutionised the way we think about singing, songwriting, music as protest and the very definition of folk music, all in their first decade as a performer. That Dylan did all this while remaining elusive, chameleonic and defiant sets him apart from almost anyone else to ever sing into a microphone.